« The Reasonable Moralists in a World Run Mad | Main | Seth Godin Says, Be Like Me and You Will Prosper, You Nonprofit Ninnies! »

Hyperagency: How Gargantua Reformed All of Paris 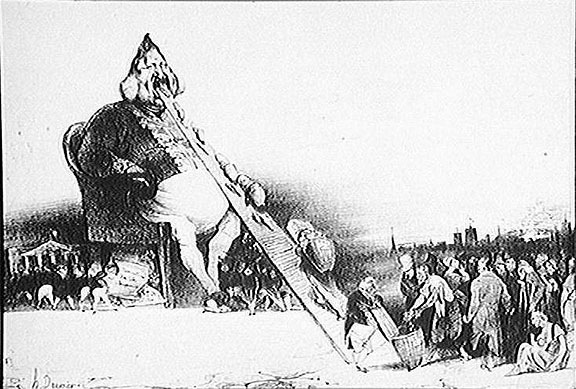 My soul, which in the contempt of this world seems to men as it were to die, shall live not to itself, but to him. Saint Augustine

Dr. Paul Schervish, head of the Boston College Center for Wealth and Philanthropy, speaks admiringly  of very wealthy people as "hyperagents" who by force of will, and force of money, can create the world they want, or realms within it, whether it be a corporation, a museum, a new church, or whatever it is that will constitute "life as we know it," for more ordinary mortals. Perhaps the earliest and still the most memorable of these hyperagents was Gargantua, the giant in Rabelais, here reforming all of Paris by simply unbuttoning his britches and letting loose a flood.

Some few days after that they had refreshed themselves, he went to see the city, and was beheld of everybody there with great admiration; for the people of Paris are so sottish, so badot, so foolish and fond by nature, that a juggler, a carrier of indulgences, a sumpter-horse, or mule with cymbals or tinkling bells, a blind fiddler in the middle of a cross lane, shall draw a greater confluence of people together than an evangelical preacher. And they pressed so hard upon him that he was constrained to rest himself upon the towers of Our Lady's Church. At which place, seeing so many about him, he said with a loud voice, I believe that these buzzards will have me to pay them here my welcome hither, and my Proficiat. It is but good reason. I will now give them their wine, but it shall be only in sport. Then smiling, he untied his fair braguette, and drawing out his mentul into the open air, he so bitterly all-to-bepissed them, that he drowned two hundred and sixty thousand, four hundred and eighteen, besides the women and little children. Some, nevertheless, of the company escaped this piss-flood by mere speed of foot, who, when they were at the higher end of the university, sweating, coughing, spitting, and out of breath, they began to swear and curse, some in good hot earnest, and others in jest.

The wisdom and moral imagination of Rabelais is well within Paul Schervish's range, as a former Jesuit, who undoubtably knows "contemptus mundi," the sin of vanity, and the risk of admiring earthly success without regard to the moral tenor of the larger than life personage. Yet, it is a matter of genre, and the decorum proper to discussing wealth. To write, "he so bitterly all-to-bepissed them, that he drowned two hundred and sixty thousand, four hundred and eighteen, besides the women and little children," in a discussion of giants, let alone hyperagents takes Rabelais, or one who works in his tradition, that of Diogenes, as Rabelais would agree. I would personally never write of a famous philanthropist "be-pissing" himself or herself, or all of Dallas, or New York, neither literally nor metaphorically, in a respectable blog like Gifthub. As a Morals Tutor to America's Wealthiest Families, and a former apprentice Dungeon Master to the Stars in Wealth Bondage (The Garden of Earthly Delights), I like, Paul, the former Jesuit, now in charge of the Boston Center for Wealth and Philanthropy, maintain a higher tone. I, unlike Rabelais, one of the greatest moralists who ever lived, keep a civil tongue in my head. It is better for business.

The picture by Daumier, by the way, is of the King, represented as Gargantua, being fed by his admiring subjects. For this caricature the artist was imprisoned for six months, making my point about keeping our civic dialogs civil. Gargantua should have kept his fly buttoned, or if he did piss all over the people, Rabelais should have passed over the matter in silence. Some things are best done but not said.

He and I are, I hope, good enough friends that he would enjoy it, really. He is on the advisory board for the charitable credential that I support. We have often talked of the issues. This whole matter of how to have a moral dialog on or about wealthy people and their philanthropy is a hot topic in emails with many people like Paul, Peter Karoff, Elizabeth Lynn, Director of the Project on Civic Reflection. The need to be polite, decorous, in good taste, seemly and respectful, limits the stylistic options and makes certain kinds of moral action in a public space impossible. I think the more respectable figures in my field would say, "Phil is quite entertaining." "He plays the fool quite well." "Phil, we all have our methodology and process for dealing with clients and constituents." Unless we change the frame, the genre, and do it based on proven models, Rabelais being a distinguished one, we won't change the scope of what is admissable, nor the attitudes that are permissable. I guess, recently, I have rediscovered my courage to write from inside wealth bondage in a way that makes the shape of that predicament visible and topical. Others sometimes write within that frame with their golden chains concealed or presented as an ornament freely chosen for personal adornment, or as a Chancellor might wear great gold chains as a sign of duly delegated authority. The morality of such moral discourse, indiscriminately admiring of wealth, silent as to its failings, is questionable, but to raise that question gets you into the issue of good manners and good se. Rather than criticising others, better for me to simpy follow Gargantua and reform all of Paris myself!

I have rediscovered my courage to write from inside wealth bondage in a way that makes the shape of that predicament visible and topical. Others sometimes write within that frame with their golden chains concealed or presented as an ornament freely chosen for personal adornment, or as a Chancellor might wear great gold chains as a sign of duly delegated authority.

Golden chains, you say? A central element of the uniform of rappers and pimps?

Perhaps you'll transform intelligent satire about philanthropy in an oligarchic pomo world into a new genre ... classics-based hiphop aka moral discourse ... and change your moniker from Tutor to Sixty Cents ?

Discounted to Sixty-Cents from one buck. Who has done most to get real civic dialogs going throughout America this year? Has to be Sean Hannity on ObamaCare. That is an authentic Town Meeting format, where we get to meet our appalling neighbors and see what our educational system has produced, no Citizen Left Behind. The style of a Horace, Swift or Rabelais - upper class or populist? Honestly, it was an elite co-optation of Carnival, the Bumpkin's Fair, Public Hangings, the Pillory, the scapegoat rituals, the Bordello, as well as the Mystery Cults. The worst energies set loose, as with Hannity, but channeled to a higher "more civilized" purpose.

Honestly, it was an elite co-optation of Carnival, the Bumpkin's Fair, Public Hangings, the Pillory, the scapegoat rituals, the Bordello, as well as the Mystery Cults.

Delicious, and correct. Seen from outside the fishbowl, all the shenanigans of the last couple years have the distinct air of Burning Man in suits, without the collective purpose ;-)

That's all well and good, but hardly Godinough. See Seth talk. See Seth tell you that if you're not among the top 100 Tweeterers, you are not a serious nonprofit. Can't you feel the passion? You've got the piss but where's the vinegar? Where's Seth Godin cheering you on, shaking things up, going to lunch? Where's your shame and your fire in the belly? Shake it up!

If your non-profit isn't acting with as much energy and guts as it takes to get funded in Silicon Valley or featured on Digg, then you're failing in your duty to make change.

Thanks, Tom, blogged it. Just came from a board meeting for Interfaith Worker Justice, held at the AFL-CIO convention, where Obama spoke. I looked for Godin there, but did not see him. IWJ works to stop wage theft by employers of poor workers money. They also do organizing, street protests, and a work through religious leaders to leaven our materialistic society with at least some concern for human dignity of all people. Few were twittering there.

Congratulations! Your readers have submitted and voted for your blog at The Daily Reviewer. We compiled an exclusive list of the Top 100 nonprofit Blogs, and we are glad to let you know that your blog was included! You can see it at http://thedailyreviewer.com/top/nonprofit/2

You can claim your Top 100 Blogs Award here : http://thedailyreviewer.com/pages/badges/nonprofit

P.S. This is a one-time notice to let you know your blog was included in one of our Top 100 Blog categories. You might get notices if you are listed in two or more categories.

P.P.S. If for some reason you want your blog removed from our list, just send an email to angelina@thedailyreviewer.com with the subject line "REMOVE" and the link to your blog in the body of the message.

Thank you. My respectability is often in doubt, so any sign that I am a reputable person does my business in wealth bondage good.

The comments to this entry are closed.